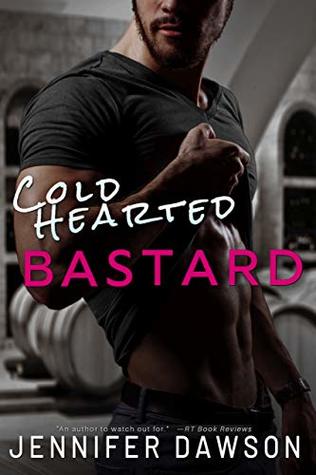 Cold Hearted Bastard is a romance novel written by Jennifer Dawson. It is the first book in the Bastards Series. The story follows Gwen and Jackson. They are both celebrities in the culinary world. Gwen is a chef and the owner of one of the best restaurants in Chicago. And Jackson, he is a genius, a chef of world renown. However, six years ago, Jackson went off the grid. No one knows why he’s disappeared. A few restauranteurs have sought him out throughout the years, but he had turned down all offers to come back and cook for them. Gwen has a plan. She’s confident she can convince him to come work for her. Little does she know that meeting Jackson will change her life forever.

This is my first time reading about chefs, so that’s new. However, many tropes are still here. One is even „hinted“ in the title. I didn’t mind the tropes all that much since the plot wasn’t as formulaic as in some of the previous books I’ve read.
I think the characters were fine. I actually really enjoyed Gwen, which is a bit surprising since I often find female protagonists annoying. But, Gwen was fine! I liked how ambitious, strong-minded and intelligent she was. And, I think most importantly, I liked that she fought back. She didn’t let Jackson give her shit and manipulate her all the time. Which is rare in romance novels! However, I must be really self-destructive, but at the end of the book, I almost wished Jackson and Gwen wouldn’t get back together. I was bitter the whole time he was trying to get her back and really rooted for her when she rejected him. The grand gesture was incredibly cringy… I know, I know, it was supposed to be, and he planed it that way… but why? I was so annoyed with the two final chapters!

A bit of a spoiler… but, I didn’t like it when she decided to move in with him leaving her friends and family. She left everyone she loved, the city she loved, the restaurant… for what? A man who she in actuality couldn’t know if he was going to snap again and push her away? Gross. I get that she loves him and all that, but is that risk worth taking? Are there no less drastic ways to start that relationship? They know each other for barely three weeks!!! Gross. I am so disappointed. I don’t completely blame the author for this unrealistic behaviour since there are in reality stupid people who act like this but come on… I could actually vomit. If one of many family members or friends tried to pull something like that off I would literally try to punch some sense into them.
Gwen has worked for years to build her life and career just to meet some bloody hillbilly bastard and throw it all away? Even after he acted as an absolute dickhead to her? Just because he did a few nice things for her to prove his love? And, just to spice it up, he didn’t even know her well enough to design his grand gesture alone. He had to ask her best friends what Gwen’s favourite movies, songs, foods were… because he didn’t know anything about her. And then he even joked about it. Like: „haha I didn’t know anything about you, haha so I had to investigate… and this grand gesture was actually designed by your best friend Jillian… but I love you so much because of your beautiful personality (which is unfamiliar to me)…“.
Wow, such a romantic. I wish I had my own…

The writing. It was enjoyable. Not the best I’ve read, but it wasn’t boring or tiresome to read. I was entertained and hooked throughout the whole book. Well, at least until the main conflict escalated. The writing itself didn’t get worse then, my annoyance was caused by the reasoned mentioned in the last few paragraphs.

So… what else is there to critique? What else can I point out and then rip apart? Well, I’m sure the list is endless, but I’ll stop here. Thank you for reading my rant! Your opinions are more than welcome!

I received this book in exchange for an honest review