Vicious by L. J. Shen is a romance novel. It follows a story of Emilia LeBlanc whose parents were servants in the house of Baron Spencer aka Vicious. They met at the start of their senior year of high school when Emilia’s family moved to Todos Santos. From the moment Vicious first saw Emilia he ruthlessly bullied her. 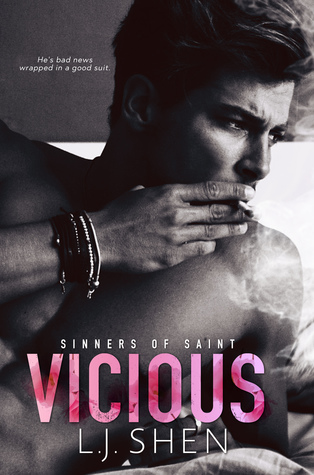 She was fascinated by him even though he didn’t deserve it. Ten years later, Emilia is living in New York with her sister. And her life is far from perfect. Far from good, actually. Then she runs into Vicious and everything changes.

Well, well, well… you should now prepare yourself because I am about to rip this book a new one. Let’s first address the elephant in the room. I hope I’m not the only one bewildered with the choice Shen made with the name Vicious! What? Girl… were you ill?
I mean, I get the whole deal with male names in erotica and romance books. They always have powerful and daunting names to showcase their masculinity while at the same time giving a contrast to how they’re acting with their love interest. And I’m fine with that, most of the time. But, come on… I would actually prefer if Vicious was him name not his nickname. His name is not much better – Baron.

What bugs me is the fact that he probably one day told his friends to call him Vicious and they just did? How did he make them? Was he like really scary? Wow, if one of my friends tried to pull something like that off I would break down laughing and most certainly make fun of them forever. Also, let’s get past the friends thing and move into romance territory. How can you, without at least giggling scream that name during sex?
What else is there to say? That’s all folks!

Speaking of our favourite scary boy, he has problems. And I mean like deep, heart-wrenching, bone-breaking problems. His childhood was filled with every type of fucked up. I’m not going to spoil you, but you should definitely look into the trigger warnings for this book! We have all types of violence and neglect.
What bugs me is that I have a feeling that all of this has been put in his backstory just to justify his current behavior. Since he is such a fucking asshole throughout the whole book, now that you know what has happened to him you should automatically feel sorry for him. Your trauma does not excuse your behaviour towards other people. Especially when your behaviour causes trauma in other people.  I enjoy reading about characters with severe trauma who throughout the book get better, learn how to deal with what happened to them and simply attain a better quality of life. However, in this book that wasn’t the case. We had this “damaged” boy who has been bulling his love interest for a whole year and in his mind it was okay because “she was his”. He constantly manipulated her and others to hurt her or to make himself feel better which often ended up again hurting her. And she put up with it. Because she was just so nice, lovable and innocent. And he was tainted, broken and vile. So he had to break her because he was jealous. Okay… that can be normal human behaviour. It doesn’t make it okay. It especially doesn’t make it okay when you are twenty-fucking-seven and you are still acting this way towards another person. And this doesn’t stop when he starts “feeling” things…

“You were so clean, and I was filthy. I guess I wanted to dirty you up.”

“He was toxic, poison, and he was going to kill everything beautiful in my life if I let him. He was the storm to my cherry blossoms.”

“He said he doesn’t know any Emilia, but he does know a girl named Help.”

Let’s get a bit more lighthearted for a moment and talk more about stupid names. Firstly, the fact that our bad boys have a name for their group – Four Hot Holes. Stupid name, but they were in high school so what can you expect. And then the little fuckers go and decide to name their company FHH (Fiscal Heights Holding aka Four Hot Holes). Wow, that is so outrageous I can almost see four rich kids doing it. Made me laugh, so I guess that’s a positive.
One other thing about their company… what do they actually do? Because they all claim to be lawyers and yet they have a company that deals with finance and stock.

Now, onto my next victim. Emilia LeBlanc. Is this woman nine years old? What’s up with her clothes? “She came in wearing a red-and-white ladybug dress – I shit you not – and yellow leggings.” Okay, fine. Not important, just personal preference…
But then you have him: “He wore a long dark-gray pea coat, charcoal slacks, a cashmere sweater, and his usual scowl.”

Let’s move onto the dialogue. All I can say it was okay most of the time, but when it was bad, it was really bad. Incredibly cringy.

It wasn’t all bad, of course, but writing about the bad parts is my favourite, as you all know by now. I did like the bad, tormented boy trope, as usual. He was just a bit too vicious… (I apologize for this one.) I like that in the end he did start respecting her, even though in my opinion she shouldn’t have stayed for so long and waited for him to learn to  respect her.
I think I will continue on with this series since I can see how good this book could have been. I am interested to see what L. J. Shen does with the remaining three Hot Holes. And to say I wasn’t entertained would be a lie.