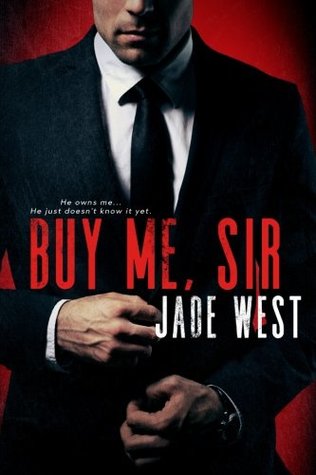 Buy Me, Sir by Jade West is a dark romance novel. And dark it is. The story follows a barely nineteen-year-old Melissa and much older Alexander. They are both twisted. Melissa has obsessed over Alexander ever since she first saw him when she was only fourteen. This continues even now – to be more precise – Melissa has sought a job of a cleaner in Alexander’s building just to be close to him. Unaware of all of this, Alexander has his own problems.

“The legal Puppet Master pulling the strings of the dirty elite. Just who is Alexander James Henley Jnr?”

He is a sex addict, despises his job and his life and himself.

What we have on our hands are two deeply damaged people. Their faiths intertwine in the most bizarre way, however, it is partly designed by Melissa. I am not sure is Melissa and Alexander are quite healthy for one another…

I don’t know. I am at loss for words on this one. I can say I enjoyed reading this book even though it wasn’t unenjoyable. It was compelling, but since it made me uncomfortable at moments I considered dnfing it.

There isn’t much to say about the writing itself… it was average at best. The main protagonists didn’t really have their own voices. They somehow blended into one voice, so when I read I had to check to see whose pov we were in since I couldn’t tell simply by the storytelling.

The plot was dragged. There weren’t any memorable plot twists. The only one I remember was from Alexander’s past but I find it unimportant since it didn’t advance the plot. It could have served as a way to develop Alexander’s character further but at the moment it was presented it didn’t serve that purpose.

This was a below average read for me. Very naive – especially the ending. (This bugged me even more since this is supposed to be a book about a lawyer and yet the ending is utterly unrealistic.) I don’t know when and if I’ll be reading more Jade West.