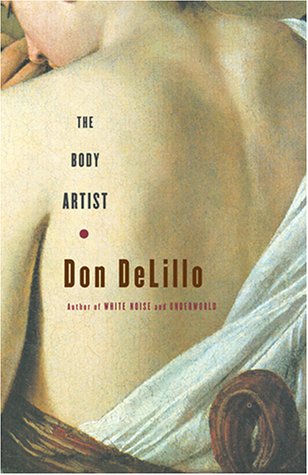 The Body Artist is a book written by Don DeLillo. It is sometimes referred to as a novel and sometimes as a novella. I don’t really see the need to classify it as one of those (or to classify it at all for that matter), but you can leave in the comments your arguments and opinions.
This is a story of a young woman whose husband has committed suicide. She was her third wife and much younger than him. We follow in her footprints as she deals with death and loneliness.

This was, in my opinion, a quite peculiar book. It was narrated in two perspectives, from the second and the third person. The use of storytelling from the second person was rare, but it was there for a few times on the very beginnings of chapters. I didn’t fully understand the point of it, but I guess I will have to reread the book to catch some of the details. (Feel free to tell me your opinions below.)

The author Don DeLillo beautifully used time as a “poetic figure”. He intertwined the past, the present and the future to appear as one moment, but at the same time like infinity. I rather liked this, because it gave so much more mystique to the character of Mr. Tuttle, as well as to the whole book.

However, I cannot say I bonded with this book or with any of the characters. It was very fast paced. Also, even though this book was deeply personal and dealt with the psyche it felt extremely far away in a sense and I way in a way unable to reach it.

I really like the ending, even though it left me with even more questions than I had at the start. It was peculiar and weird and charming.

To conclude, I would like to say this was in no way an amazing reading experience, but it was far from unenjoyable. It was poetic and filled with artistic elements that simply screamed emotions, but there was little to no plot. Don’t bother picking this book up it you enjoy plot-driven stories, but if you up for some lovely poetic nonsense this is the one for you!