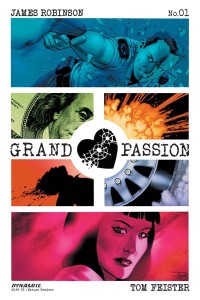 Grand Passion by James Robinson is an action, romance graphic novel following the love-at-the-first-sight of Mabel and Mac. They were polar opposites at the beginning of the graphic novel – he a well-behaved cop and she a half of a thieving duet.

I was not impressed with this graphic novel. I find it quite shallow and not well performed. The illustrations are average at most, nothing special or breathtaking about those. The characters are quite one-sided and not at all branched out. We know nothing about the main characters besides their undying love for one another before they even meet each other and how tough they both are. Yuck. I want to know what drives them, what they think about in the shower when the most bizarre thoughts hit them. I want to know what made them as tough as they claim to be and what could break their facades.

Taking everything in concern I can only say this – this graphic novel is average if not less. It had a hard time holding my attention since the plot was so basic. But the only thing I had a real problem with in this graphic novel was the insta-love. Why?
I warn you, there might be some spoilers in the remainder of the paragraph, but since it was publicised on the back cover I do not think I will reveal anything really spoilery.
The whole graphic novel is basically built around the love-at-the-first-sight, which I find quite weird. It was extremely unrealistic and I did not even understand the concept of thinking behind the idea of creating the love plotline the main plotline. I cringed every time the main two characters spoke of their feeling for one another since the dialogue was so badly written. Nothing could simply compensate for those things in my eyes.

I was sent this graphic novel in exchange for a review.